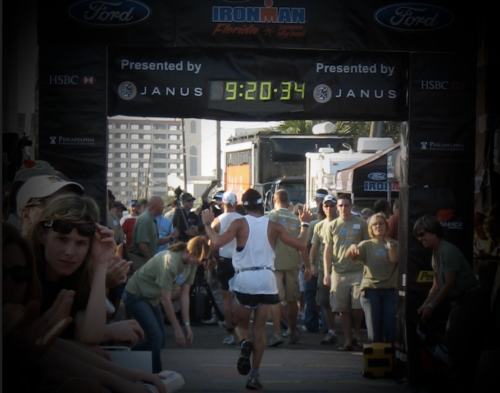 For the past 6 years, I have trained with the hopes of going 1/5/3.  Be on the bike in one hour, less than five hours on the bike and sub-three hours for the run.  And for the past 6 years, I truly believed (and still do) that I am capable of going well under 9 hours. The thing is, with Ironman… you never know.  So there you have it – my goal and idea of what I thought I could do at Ironman.

Note:  This post was written in November, 2007, my last season racing as a professional.

My training times indicated that the 1/5/3 times were within reach, but after doing 8 of these things, I knew I had to ignore the clock and race on feel.  I also knew that I couldn’t let my emotions be dictated by the clock.  In previous races, when I had a slower-than-expected split, my mental state was negatively affected.  As part of my Florida prep, I worked on not clinging to expectations; I wanted to race hard, execute my plan, and accept what the race had to offer.  So, with that attitude, I awoke on Saturday, November 3rd for my 9th Ironman. 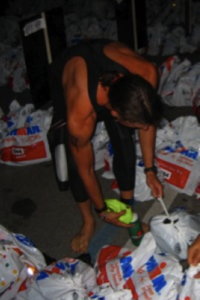 Race morning went pretty smoothly.  I got up around 3:30, downed about 1200 calories and sat around until 5 am.  Set up went well – I got my calories put on my bike, my computer calibrated, my special needs bags dropped off, and my transition bags organized.  Joe Chambers helped a lot – he got into the  transition area, found a pump, helped pump up my tires, and helped get my transition bags organized.  It kind of made me wonder how I did these things by myself the other times…

By 6:30, I had my wetsuit on and was heading for the ocean.  Unlike last year, we had calm winds and calm water.  I’m not sure what the water temperature was, but everyone was allowed to wear wetsuits (pros can’t wear wetsuits if the water temperature is above 72o).  I was able to do a nice warm-up and re-established my “peace with the water.”  There was a rather large pro field (over 100 males and females), so drafting was going to be easier than in past years.  I lined up on the right side of the group for a few of reasons 1. I breathe to the right 2. I drift to the left and 3. There was a right-to-left current.

My goal in the swim was to:

We started at 6:50, and I was immediately immersed in a tight-packed group of swimmers.  After about 5 minutes, the pack thinned and I found a nice pair of feet to hang on to.  My group ended up having three folks in it, and we were trailing a larger group by about 30 seconds by the halfway point.  I was pretty encouraged when the clock read 28:xx at halfway and thought that I may finally get a sub-1 hour swim.  But it was not to be.  My group of three became a group of two, and we didn’t catch the larger group just ahead of us. I exited the water with the clock reading 1:00:xx.  The good news was that the swim felt incredibly easy and I managed to not spike my HR during the halfway swim turn-around run on the beach!

Wetsuit stripped, grab T1 bag, run to tent, helmet on, run to bike…  but, no Valdora!  The folks in transition are notified which athletes are coming out of the T1 tent and get their bikes off of the racks.  I couldn’t find my bike and the lady holding my bike didn’t see me looking for it.  I don’t think it took too long to get my bike from her (10 seconds?), but for a moment, I was wondering if somebody else had ridden off on my bike. 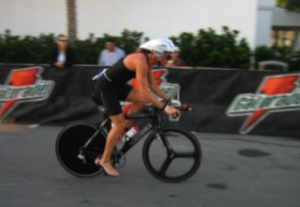 My plan on the bike was to:

I used my computer to give me 15 minute intervals.  During the interval, my computer showed my HR, cadence, current watts, and average watts.  At the end of the interval, I could see my average speed.  My goal for each interval was to keep my HR and power under control.  Splitting the ride up into 15 minute segments gave me a way to break up the monotony of the flat ride and give me a chance to eat, drink, and stretch.

This was one of the only ironman races where I actually was in a pack that worked together (legally).  We had a group of 4 guys.  Another guy and I took turns setting tempo.  I’d sit at the front for a while, when I sat up, he came around and set the pace and I’d go to the back.  Keep in mind- this was totally legal; we kept 10m between us when riding.  I now understand the benefits pros got last year when the draft zone was only 7m.  I don’t think there was much of a draft effect, but the pacing effect was beneficial.

Our group stayed together until mile 50 where I had to slow down to get my special needs bag.  Normally, they have these ready to go, but this time, there were enough athletes around, they didn’t have it ready.  I  had to completely stop.  I spent the  next 15 minutes  catching back up to  my group.

Around mile  60, a train of age groupers passed us.  It was as if they weren’t aware of drafting rules.  Now, getting passed is fine, but, according to the rules, when  passed, you need to drop back to  the 10m zone.  So, as you can imagine, each time an age grouper in this train passed me, I had to slow down and drop back.  No big deal really. We were in two different races.

It was very interesting to observe the care the pros took to abide by their 10m drafting rules when in a pack compared to many (not all) of the top age  groupers in packs.  The age groupers that got into a pro pack, though, did a nice job of following pro rules.

We do this little 3.5-mile out-and-back around mile 70.  The last 3 times I have done this race, when I turn around and head back down the road, I see a few bikers (maybe 50 total).  This year, when I made the turn-around, I was faced with HUNDREDS of bikers.  I was amazed at how fast these folks were riding.  Unfortunately, many of them were in packs, but never-the-less, people were really fit and strong on the bike this year. 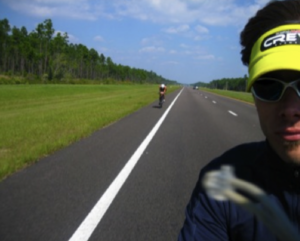 One really cool thing about the bike this year was that Joe rented a scooter.  The first time I saw him was around mile 70, at the out-and-back part.  From mile 70 through the end, he would leap-frog me; each time he passed me he would say something either encouraging or stupid (mostly stupid).  It was really nice having him out there.  The picture above is Joe on his scooter and me in the background.  This picture was around mile 80. 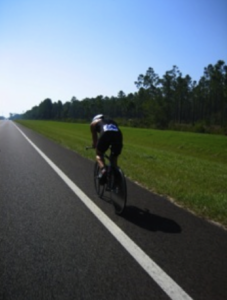 Miles 80-100 were relatively solo.  I biked away from the guys in my group and had open road ahead.  I kind of expected the age-group train to catch me, but they never did.  I reeled in a couple of guys spit out the back of the earlier age group train, but I mostly kept the watts and HR under control.  I knew I had biked within my limits because my last few intervals were still in the 250-270 range and the HR was hovering around 140.  The picture to the above was during the last 15 miles of the bike, when I had a nice open road ahead of me and only Joe to keep me company!

I got off of the bike with the race clock reading 5:57!!!  Sub-6 off the bike was a goal I had for a while.  Strangely, my overall placing at this point in the race was lower than in any other IM Florida I had previously done.  That says something about the caliber of athletes at this year’s race.  It was really stacked.

I made a decision to change clothes for the run.  I also made a decision to tie my shoes (rather than use elastic laces).  Before I left for Florida, I thought to myself, “How long does it really take to tie shoes?  30 seconds? 40 seconds? No big deal in the scheme of things, right?”  Well, that is true, but I would have liked those 40 seconds back at the end of the race.

My T2 time was rather pitiful due to the clothes changing, shoe-tying, and pit-stop.  Still in the scheme of things, no big deal, but the minute or two I wasted could have been…

My goals for the run were to:

Mile 4 was 7:10.  From experience, I know it is unlikely that one speeds up in an IM marathon.  Rather, we just hope the fade isn’t too severe.

I was still taking in good calories at each aid station and they were staying down.  No GI issues, no nausea.  By mile 13, I had faded to 7:5x miles and I knew it wasn’t going to get any faster.  I still thought that I had a chance of holding pace and going sub 3:20 for the marathon.  BUT, each mile got slower.  I felt like I was running the same pace, but  my watch told a different story.  8:00 turned into 8:30’s which bottomed out at a lowly 8:45 mile.  The picture to below is during the fade (~ mile 19).

Around mile 21, I had to stop for a minute because I honestly thought I was going to pass out.  I did a little bend-over stretch, and then started running again.  This was the only time I stopped.

About this time, Joe yelled to me that I could still go under 9:30.  I was somewhere between mile 22 and 23, so I couldn’t get an accurate idea of the pace I needed to go; all I knew was that I couldn’t slow down any more.  By mile 23, I saw that I had just under 26 minutes to cover the last 3.2 miles.  On any other run, 3.2 miles in 26 minutes would be a joke, but today, it seemed like a pretty tough task. 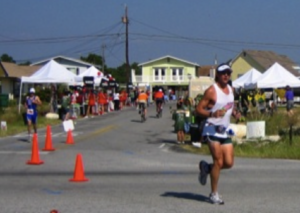 It is interesting how the perspective of ‘a good time’ changes when you are forced to face the reality of the race.  Before the race, I was shooting for a sub-9 time, with possibly 8:40s on a good day.  Now, I was working hard to go sub-9:30.  Before the race, I would have thought 9:30 would have been a real let-down, but now, in the final miles of what was likely going to be my last Ironman, 9:30 was a time I was desperately wanting.

I was very content at the finish of this race.  I enjoyed almost every moment of the race and treasured this last tour of the IM Florida course.  I didn’t achieve the time I was hoping for, but I executed my goals.  I picked myself up after Canada and went after it again.  For this, I was proud.  Was I fit enough to go sub-9?  Probably.  Will I ever go sub-9?  I don’t really care.

I totally enjoyed the process of getting to where I am.  IM has given me 6 years of passion, motivation, frustration, insight, and humility.  I received more than I expected from IM racing.  I have high standards and expectations.  These standards often set one up for disappointment, and I have had my fair share of self-inflicted disappointment.  Really, though, I had a great time and had some good times.   I leave IM racing (for now) with only a twinge of regret that I never had my breakout race.  But then again, I knew it may never happen.

And with that, I conclude my final IM race report.