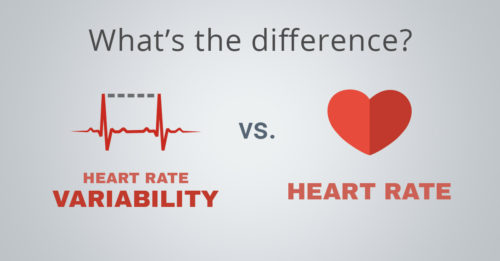 Heart rate variability (HRV) is a measure of constant fluctuations in the rhythm of the heart.  HRV gives an instant “snapshot” of the status of the ANS.  It is measured by an ECG and is analyzed by a variety of different methods.  Depressed HRV is linked to overtraining and serves as a marker of cardiac risk.

Proper training can result in positive CV effects.  Excessive training can result in, among other things, autonomic imbalance and decreased HRV.  Patients who have experienced cardiac events or diabetic neuropathy also have a decreased HRV.   Therefore, HRV can serve as a method of detecting both overtraining in athletes as well of risk of recurring cardiac events in patients with previous problems.

How can this help athletes train and stay healthy?

Overtraining is best described as an imbalance between stress and recovery, with the balance shifted towards stress.  Physiological stresses caused by too many training sessions, high volume, and high intensity as well as psychological stresses like mental fatigue and personal problems can cause overtraining (1,5).   Some of the symptoms of overtraining include:  reduced performance, fatigue, apathy, decreased immunity, headaches, insomnia, decreased appetite, hormonal imbalance, performance incompetence and decreased heart rate variability (1,5,6,10,14).

Overtraining syndrome is not an acute problem, but it manifests itself gradually.  Overreaching refers to the beginning stages of overtraining and can be reversed with days to weeks of rest (5).  “Staleness” results from continual stress and lack of recovery and is observed by a decrease in performance (1).  Overtraining is a result of long-term stress and hormonal imbalance, and it can take months to years to correct (5). 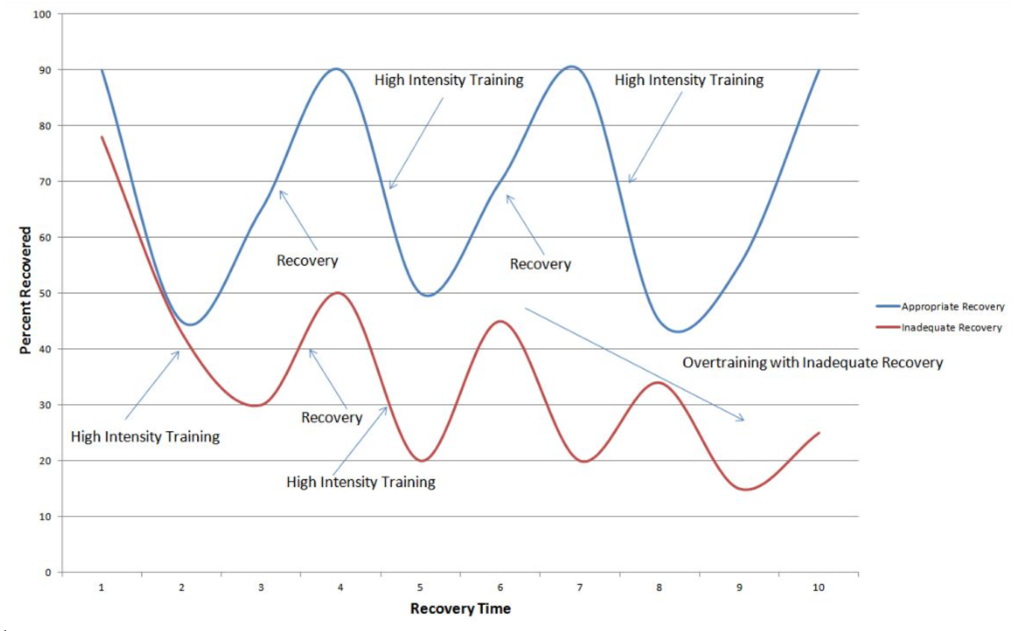 AUTONOMIC CONTROL OF THE HEART

Autonomic Nervous System.   The cardiovascular system is controlled by the autonomic nervous system (ANS) through the sympathetic nervous system (SNS) and the parasympathetic nervous system (PSNS).  At rest, PSNS controls the CV system by decreasing heart rate, dilating blood vessels, increasing GI motility, and opening sphincters.  The PSNS serves as a “pacemaker” at rest and has nerve endings specifically on the sino-atrial node, on the atrial myocardium, and on the atrio-ventricular node.  The SNS produces opposite results and relies on increased catecholamines to stimulate the beta-receptors on heart (1).

During exercise, heart rate increases as a result of PSNS withdrawal and increase in SNS activity (although the latter is debated).  Table 1 shows a summary of studies and describes PSNS and SNS activity during exercise.  PSNS consistently decreases or withdraws, but SNS activity is variable.

Parasympathetic (vagal) fatigue.  Parasympathetic fatigue is a result of exhaustion of the ANS; PSNS activity is increased, and SNS activity is inhibited (3). Parasympathetic fatigue is more common in athletes and is due to inappropriate volume of training sessions.  Symptoms include:  high fatigue, apathy, altered mood state, persistent performance incompetence, altered immune function, altered reproductive function, and hormonal imbalance (3,6).  The SNS is altered (slightly overactive) early in overtraining and inhibited late in overtraining.  Low resting heart rate and a delay in heart rate increase when exercise begins indicates an overactive PSNS and inhibited SNS (1,16).

Mechanism for parasympathetic fatigue.  Overtraining leads to a decreased adrenal responsiveness to ACTH.  To counteract this, the pituitary gland increases ACTH production and release, but it cannot overcome the reduced adrenal response.  After time, the pituitary gland shuts down ACTH production and release (6).  Consequences of the decreased ACTH response are: reduced adrenal cortisol response from the adrenal cortex (ACTH insensitivity), insulin-induced hypoglycemia (altered cortisol balance), and overproduction of catecholamines from the adrenal medulla (insensitivity of target organs) (6,8).

Consequences of hormonal imbalance.  Resting plasma catecholamine (epinephrine and norepinephrine) levels are significantly increased in an overtrained individual.  The bets-receptors on the target organs lose sensitivity and, in time, fail to respond to the catecholamines.  This suggests a protective mechanism against irreversible damage to the target organ.   The beta-receptors either lose sensitivity to the catecholamine, or the density of beta-receptors decreases (1,6).   The conclusion is that the fatigue and individual experiences could be due to “decreased beta-receptor-mediated metabolic and cardiac effects” which results in a decrease in submaximal heart rate, decrease in blood glucose, decrease in lactate threshold and decrease in free fatty acid responses (6).   Interestingly, at maximum effort or in high-stress situations, the beta-receptor responses are maintained, indicating that the fight-or-flight response is still present (6).

Heart rate variability (HRV) is defined as the “continuous oscillation of the R-R intervals around its mean value” (7).  HRV gives an instant “snapshot” of the ANS and can show the balance between the PSNS and SNS (1,7).

Measurement.  Clinical HRV measurement is done with an electrocardiogram (ECG).  The time of the ECG test depends on the study and can range for 10 minutes to 24 hours (Holter recordings) (1).   Environment, prior exercise, and diet are controlled to minimize interference in the ECG.  The time differences between R-R waves are calculated and presented in a variety of methods.  There are over 25 different presentations of HRV data in scientific literature, which makes comparing studies difficult (1,11).

Two frequencies on the ECG are monitored and give insight to the activity of the PSNS and SNS.  Low frequency waves or Mayer waves, 0.04-0.15 Hz, represent a combination of SNS and PSNS activity, while high frequency waves, 0.15-0.5 Hz, represent only PSNS (vagal) activity (1,2,7).  A common HRV test is the tilt test.  The subject lies supine on a special tilting table while an ECG records heart activity.  After some time, the table tilts the subject upright to 70 degrees.  Heart rate changes are monitored during the upward tilt (3,5).

Negative HRV changes occur with overtraining.  The cause is parasympathetic hypertonia and sympathetic inhibition (1,3,6,16).  There is a reduced resting heart rate, a reduced maximum heart rate, and slower exercise recovery (3).  Vasovagal syncope is also a problem in an overtrained individual (3).  The PSNS promotes a low heart rate and vasodilation.  When an individual is sitting, and stands up, there is a drop in blood pressure.  Normally, the baroreflex would signal the cardiac control center to increase heart rate and vasoconstrict via the SNS.  Since the PSNS is overactive and the SNS is inhibited, this reflex does not occur and the individual may lose consciousness.  Vasovagal syncope will be mentioned later as a sign of cardiac disease.

Examples of HRV changes during heavy endurance training are plentiful.  Four studies will be presented which illustrate the spectrum of overtraining and the effect on HRV.

The HR and HRV recovery during the 4th week are ideal in a training program. Pichot concluded that the heavy training led to a dominant SNS over the PSNS (2).   These athletes were likely in the overreaching stage, and did not reach the level of ANS dysfunction.  Heart rate increased and HRV decreased with the increased workload, but both supercompensated when allowed to recover.  Most likely, the HRV would have continued to decrease if a recovery week was not inserted into the training and an overtraining state would have been reached.

The high PSNS activity and lowered orthostatic tolerance observed in overtrained athletes is similar to “patients being evaluated clinically for neurocardiogenic (vasovagal) syncope (3).”  Reduced HRV and increased PSNS activity is a common trend in patients with a history of cardiac incidents and may be inversely correlated with disease severity (9).   A major reason for measuring HRV clinically is its ability to predict survival after a myocardial infarction (11).  It is now widely believed that “reduced HRV may predict risk of survival even among individuals free of CHD (11).”   Gang et al. concluded “HRV is significantly depressed and associated with prognosis in post MI patients and diabetic neuropathy, and is significantly altered in patients with critical illness (9).”

Dekker et al. studied 14,672 men and women without CHD who were 45-65 yrs old.  A 2-minute rhythm strip test was recorded for each person.  Subjects with low HRV had a higher risk of incident CHD (relative risk of 2.10) and all cause death (relative risk of 1.51) compared to those with a higher HRV.  Dekker concluded that low HRV was related to higher risk of CHD and death form several causes (18).

Two clinical conditions currently benefit from the use of HRV to determine risk.   HRV predicts risk of arrhythmic events or sudden death after an acute myocardial infarction.  HRV is also used as a clinical marker of diabetic neuropathy (13).