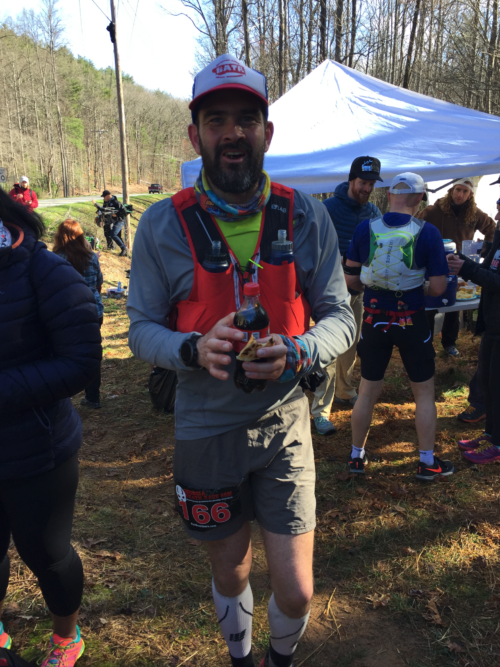 Ryan Lundin qualified for and raced the 2018 Georgia Death Race. This race is an insane 70+ mile sufferfest over 28,000 feet of elevation change. He finished in 17 hours, 29 minutes and placed 25th overall out of 169 finishers (259 started). Below is a great summary of Ryan’s experience:

GDR 2018 a tough race in a beautiful part of the country.

My alarm goes off at one am after a restless nights sleep. Too early for my movement, eat some food and have some coffee, catch the bus at 2:00am. 2 hour bus ride to the start(which has no sleeping accommodations). Stand in line for the bathroom. Do my business, check in, get that goddamn railroad spike, nervously walk to the start line.

Here’s where the adventure begins. I was so nervous, I never get this nervous!! My stomach was in knots, I was shaking a little, I just don’t know what my problem was.

We set off at 5:00am sharp up a long ass climb. I feel good other than being really gassy and a stomach ache. I’ve been having issues with that lately but it usually lasts 20 minutes and goes away. This time it lasted about 2 hours. I get to the first aid station and my watch is way off. Like almost 3 miles off. Whatever, I refill and refuel, grab a rice, bacon, egg and maple syrup bar and head up the climb. I eat that bar and my stomach ache goes away, and the gas releases I feel much better!!

I cruise for quite awhile more, straight up and straight down each peak on this 30 mile long ridge line. About 20 miles in my hamstrings and glutes are done, Quads not having it anymore. We take a long descent down into our crew assisted aid station where my wife had a coke, snickers and some Advil. The Advil seemed to help manage the cramping/soreness that my hammys/calfs had going on. Climbed back out of that aid station and continued up and down every peak.

Next section was more of the same, up a mountain and back down. Only I felt a little recharged. I took some pics, and just did my best to keep moving forward with purpose. It was this section that I knew sub 14:00:00 was not in the cards. New goal was to finish in the daylight. Calfs and hammys still wanted to cramp on me but they just were sore and weak climbing and descending. I got to the next aid station which had my first drop bag, Where I changed socks, and shirts got more nutrition ate some quesadillas and grilled cheese and headed up the long climb up to sapling gap.

Nothing really but more of the same here. I ate and drank when my watch beeped and When I climbed up to sapling gap aid station they asked, beer? And I said fuck yeah!! I had half of a lite beer, coke and a cheesy mashed potato burrito and started taking a bottle of Gatorade with me from there on out.

All that seemed to pull me out of it a little but my calf/hamstrings still wanted to cramp right behind my knee. And it all went like that until the next crewed aid station at mile 43. 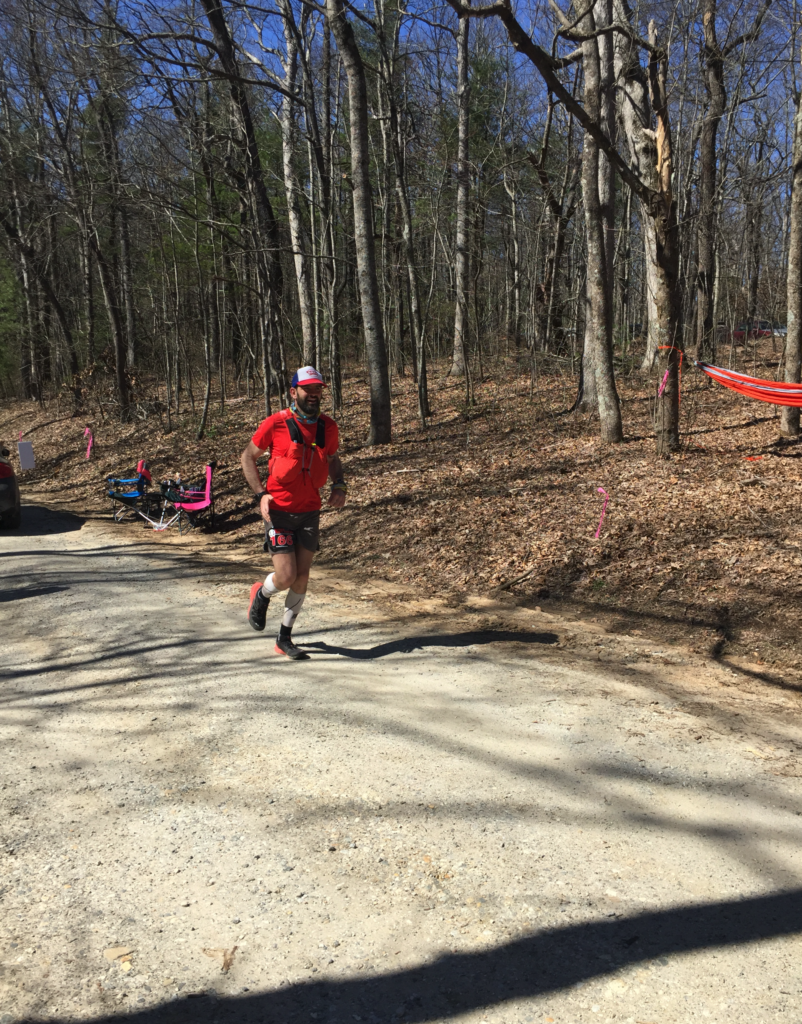 My wife forgot a chair, the aid station worker that was assigned to help me through said I looked too good to sit down, he filled my bottles, fed me a cookie, grilled cheese, made me drink a whole 20oz bottle of coke my wife had for me and right before I left he had me put my hands out filled them with boiled potatoes POURED regular old iodized salt EVERYWHERE and told me to eat it all in one gulp. Why I listened I don’t know it was GROSS. I headed down the shitty forest service road and after that aid station I didn’t feel even the slightest twinge of a cramp anywhere the rest of the day!! And it was time to go hunting!!

This next section was sweet!! I still wasn’t climbing or descending fast but when it was flat or gradually graded I was running 10-11 minute miles. I passed, I think, right around 5 people on this section!! And I kept that up the rest of the day. Nice rolling single track after the forest service road down into the aid station with my last drop bag with my change of shoes. And when I got there what an aid station!! They had made a shit load of bacon and they had smoked a whole bunch of brisket for the Runners!! I had thrown finishing in the daylight out the window now too. I was going to get to the next and last aid station by dark. 11.7 miles. 2:00 to get there. While they changed my shoes(wow) I ate my brisket and then took my bacon to go.

This next section was long but all on gravel and pavement, BUT you gain 2000’. I ran 75% of it and passed 4 got passed by one. (I caught him right at the end). Still feeling really good. I got into the last aid station right as darkness descended. I put on a buff, headlamp drank coke and headed out for the last 11ish miles!!

This section is a mix between forest service road, singletrack, and those 600 stairs. I passed 3 right out the aid station one more halfway and one right at the end. I was really getting tired too. Every step downhill sent shooting pain up my quad, but I was still running when I could!! I got down off the mountain without eating shit, hit the pavement to the stairs and they ended up being just fine!! My legs welcomed a change use and I zipped right up them!! Descended down to the finish and through the creek(which had a perfectly good bridge over it) and finished!!

What can I say about this race? IT’S FUCKIN HARD!! What did I learn from this race is a really good question. Early spring mountain races are always going to be hard for me to train for and this winter did not allow me to properly train. Do I feel I was unprepared? Not at all but I was definitely underprepared for the climbing and most of all descending. My goals for this race were definitely ambitious but I feel I could run 14-15 hours there. Top 15 was out of reach, this field was STACKED!! But, I finished strong, never even crossed my mind to quit(~40% DNF) and loved every minute of it.