High Intensity Interval Training – Is it right for you? 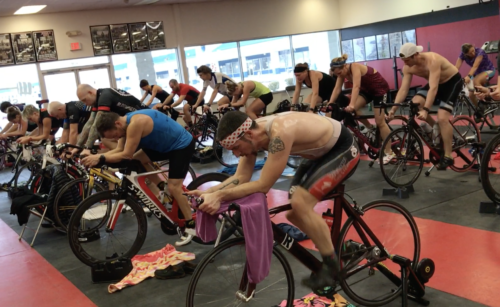 What if I told you that you could get similar endurance gains as a 2+ hour session in less than 20 minutes? Too good to be true? Read on…

In the October 1996 issue of Medicine & Science in Sports & Exercise, Izumi Tabata showed that a high-intensity intermittent exercise or High-intensity interval training (HIIT) protocol had better aerobic and anaerobic improvements than long-duration endurance exercise (1). Over the past decade, HIIT has become a popular for endurance and strength athletes alike, and numerous scientific studies have demonstrated that various HIIT protocols contribute to subcutaneous and abdominal fat loss, increased VO2 max, increased anaerobic capacity, and improved insulin sensitivity. This article describes benefits of HIIT, Tabata’s protocol, and how HIIT can be applied to endurance and strength athletes.

Benefits of HIIT are similar to those of long-duration exercise. For those who do not enjoy long endurance training sessions, there is an alternative! Recent research has shown that HIIT is better at reducing both subcutaneous and visceral fat than other types of exercise. Compared with long-duration endurance exercise, HIIT training results in similar GLUT-4 content and maximum glucose transport activity (2), similar fatty acid oxidation enzyme activity in skeletal muscle (3), and similar levels of PGC-1alpha protein (4). In addition, HIIT protocols have been shown to increase aerobic and anaerobic fitness, lowers insulin resistance, and improve fat oxidation and glucose tolerance in skeletal muscle (5). Taken together, it is clear that the HIIT produces effects similar to those found in long-duration endurance exercise, all of which are strongly desirable effects of any training program.

In addition to aerobic and anaerobic benefits, HIIT protocols augment fat loss. Anecdotally, athletes that undergo a HIIT program notice decreased body fat while retaining (or increasing) muscle strength. Studies involving HIIT protocols show significant decrease in both subcutaneous and visceral fat and waist circumference while still maintaining muscle mass (5, 6). Why does this happen? While physiologists are not certain, possible explanations include increased fat oxidation during and after exercise (ATP resynthesis mainly from intramuscular triacylglycerol stores and greater fatty acid transport, and increased capacity for fatty acid oxidation in both skeletal muscle and whole body) and decreased appetite post-exercise.

In less than 4 minutes, the Tabata Protocol maxes out the aerobic and anaerobic systems. While there are many HIIT protocols (see ref. 5), one of my favorite HIIT protocols is the Tabata Protocol. Tabata’s initial 1996 study (1) compared moderate intensity endurance training (70% VO2 max for 60 minutes, 5 days per week) versus HIIT training (seven to eight sets of 20 seconds at 170% VO2 max, 10 seconds recovery, 5 days a week) on a cycle ergometer for 6 weeks. Tabata found that in the endurance-training group, VO2max increased by 10%, but anaerobic capacity did not change. However, in the high-intensity group, VO2 max increased by 15% and anaerobic capacity increased by 28%. This protocol was tested against other HIIT protocols and was found to be the best at maximally stimulating both the aerobic and anaerobic systems (7).

The effect of the Tabata Protocol depends on going hard for 20 seconds and only taking 10 seconds recovery. During the hard, 20-second effort, you maximally recruit muscles. The 10-second recovery does not provide enough time to regenerate your ATP-creatine phosphate system and ‘pay back’ your oxygen debt, so you begin the next 20-second bout in a ‘deprived’ state. With each additional 20-second effort, you increase oxygen uptake and reach maximum anaerobic capacity near the end of the protocol.

Unlike steady-state endurance training, HIIT is not muscle-wasting. It is believed that muscles can adapt in either an ‘endurance’ manner (i.e. increased mitochondria) or in an ‘strength’ manner (i.e. hyprotrophy). Typical endurance training stimulates the pathways that induce ‘endurance’ adaptations and block pathways that induce hypertrophy. The converse is true for strength training. HIIT is unique in that it induces many benefits of endurance training like increases in PCG-1a expression (mitochondrial biogenesis), without inhibition of protein synthesis and skeletal muscle growth signaling (see ref 9), making it a great way to gain endurance adaptations without fear of turning off your ‘strength’ pathways.

All athletes benefit from aerobic training. This research clearly shows that more aerobic training is not necessarily better. While researchers still strive for the “perfect” HIIT protocol for both performance benefit and health benefit, and there are many protocols used in scientific literature (see ref. 5), the Tabata protocol seems to work very well.

Here is what I prescribe for my athletes and myself:

You’ll be done in less than 30 minutes! If you are not gasping for air and seeing stars by the end of the protocol, you did not go hard enough.

BENEFITS: The Tabata protocol is perfect for athletes that do not enjoy long endurance training sessions (i.e. 30-60 mintues on a stationary bike or treadmill at a moderate intensity) or have limited time to work out, but still want aerobic, anaerobic, and fat oxidation benefits similar to those found in long-duration exercise sessions.
DRAWBACKS: One disadvantage of the Tabata Protocol is that it is very physically and metally demanding, and takes a great deal of motivation to complete. Some folks may not be able to handle the stress of the workout and may never want to do it again. I dread the workout and almost cannot stay on the bike near the end of the Tabata Protocol, but I continue to do it because, truly I love the pain and, even more, love the benefits!