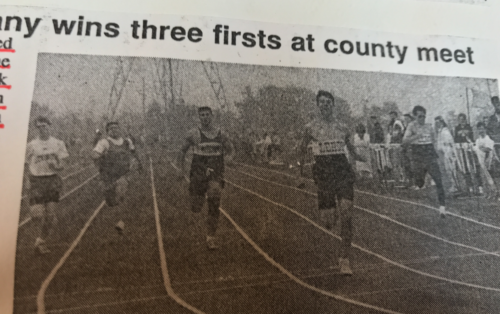 As I look back on my career, I can pinpoint three major motivators or, rather, “motivational phases.”  Within these phases, I had specific motivators, but these three phases encompass the general focus of that time.

Motivation Phase I lasted from my athletic beginnings, 1979 (the first time I remember running against another person) through 1998 (two years after I finished my college track career).

Motivation Phase II began in 1998 and fizzled out sometime in late 2007.

Motivation Phase III was the rebound from Phase II.

As I contemplate these three phases, I understand why I am attracted to certain things/people/activities and disinterested in others. I have only met a handful of folks throughout my life who can relate; not surprisingly, our stories are similar.

These are separate from psychological motivation (intrinsic versus extrinsic); those are a different category. The phases I describe are from my experience, not compared to any textbook. Below, I describe these three phases of my life.

MOTIVATION PHASE I – be the best

It used to be that winning was all that mattered to me. I guess I skipped over the “normal” first phase of motivation: enjoy participating. Don’t get me wrong, I LOVED participating, but I did it to win.

It was that simple.

I remember in 6th grade a new guy moved in. He was one of those “early-maturers” and he was tall, had a little moustache; and he was fast. In fact, he was faster than me. I disliked him for it. I wanted to be the fastest, and it bothered me every day that I may not be the fastest guy in the 6th grade. So, I worked really hard, and by the time the 6th grade track season came around, I was faster than him (it didn’t hurt that he had already “matured” and stopped growing, while I was just beginning to develop).

I carried this “must be the best” attitude throughout my high school years in baseball, basketball, and track. The annoyance of coaches telling me what I can and cannot do, the feeling that the team didn’t work to my expectations, and worst of all, lowering my expectations so I could be part of the team led me to focus on individual sports. I concentrated on track in college, and continued to want to be the best. When I lost a race, I was not happy; it gnawed at me until I could race again, proving I was better. Fortunately for me, most of the time, I won.

My “must be the best” attitude wasn’t inspired by showing off or getting attention; it was completely internal. I didn’t get off on newspaper headlines, public awards, or my name on the news (although it was fun). I wanted to be the best because of a force I could not, and still cannot, describe.

The negative thing about being driven to be the best is that I was constantly in a state of aggression. I was always thinking, “Is that guy faster than me? No way is he faster. I’ll beat him.” And then I would get so driven and focused on beating people (in races) that I became very unsettled. Folks on the outside didn’t notice; they just thought I was focused and competitive – both good things in competition. But I knew I had a disease, a disease where I was so caught up in the need to win that I felt my insides churn and aggression build when it came time to race, and I felt physically ill if I lost.

Now, as it turned out, in college I was the best 200m and 400m runner in our conference. But I knew the truth: our conference was not the best conference in the nation. Plus, I went to a NAIA college, not a Division I university. I was a big fish in a small pool, and I wanted to go to the big pool…

Note: This was written during the winter of 2008, my first year after ‘retiring’ from professional triathlon racing. This was written as I contemplated the questions brought up HERE.
I bring this up because recently I have been thinking about motivation. What motivates us to do athletics?