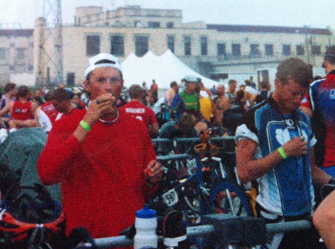 This is a continuation from “Phases of Motivation (part 1).  I continue to reflect on my continuing journey as an athlete.  The photo above is a picture of me getting my transition area ready next to Luke Bell at the Spirit of Racine half-Ironman.  I was definitely lining up against some of the best in the world.

For this reason, I travelled two hours a couple of times a week to Ann Arbor, Michigan to train and race with Olympians.   I headed to Europe to run on the track circuit, facing Olympians and World Champions… and getting beat.  But it didn’t matter, I was doing what I loved.  I met some of the best athletes in the world, and I was semi-competitive.

This phase of motivation carried over into triathlon.  I didn’t care if I won or not, I just wanted to go head-to-head with the best.  That is why I raced professional so long, not because I had delusions of making a living, but I wanted to line up against the best and try to see how my best stacked up.

The biggest benefit I received from this phase was that I gained a deep sense of peace when I competed.  I didn’t have the aggression or unsettledness.  In fact, during this phase, I worked hard to lose that part of myself.  I didn’t like the way it felt to constantly compare myself to others and wonder if I was faster or not.

I do believe that I became less hungry for victory though, and this hurt my performances.  The last couple of years, I actually tried to find that aggression and drive, but, honestly, I really didn’t want to feel that way again.

Now, that phase is over.  I am done going up against the best, with no realistic shot of winning.  Gradually, over the past few months, a new motivation has crept in… Phase III.

Note:  This was written during the winter of 2008, my first year after ‘retiring’ from professional triathlon racing.