Why do Wingates? Is the HURT worth it??? 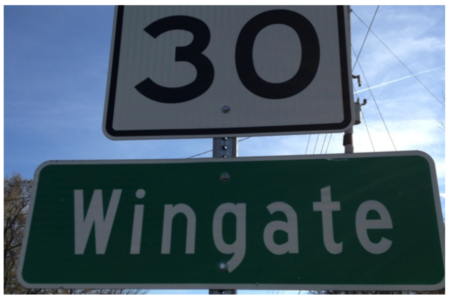 One of my staple winter workouts is the WINGATE workout. It is incredibly challenging, but one of the best workouts you can do for fitness.

The Winage protocol is familiar to those of you who have been with ECo for a while.  But many people don’t know WHY we do these.  This article attempts to explain the physiology behind the madness of the WINGATE workouts.

The Wingate test was developed in an exercise physiology laboratory in the 1970s.  It is a cycle test of anaerobic leg power, conducted over 30 seconds.

Here is an example of a power profile of one 30s Wingate effort: 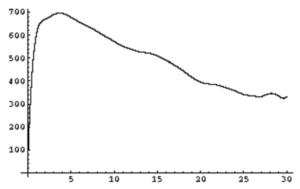 Notice that the power peaks around 700W about 5 seconds into the effort. After that, the power begins a slow decline.

So, for any given workout, it is helpful to collect and analyze data for all of the 30-second efforts. 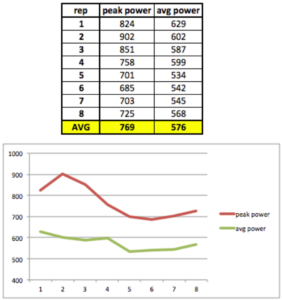 This data illustrates PEAK and AVERAGE powers for each of the 8, 30s efforts.  By graphing these efforts, we can see the FATIGUE INDEX.  Clearly, both the peak power and average power declined throughout the workout (index of fatigue).  I am also able to calculate the average PEAK power and average AVERAGE power over the 8, 30s efforts (highlighted in yellow in the table above).  These average values are valuable when the WINGATE workout is repeated many times (i.e. once a week for a couple of months).

Here is an example of a compilation of Wingate workouts (the example week above is “week 4” in the example below and is highlighted in yellow: 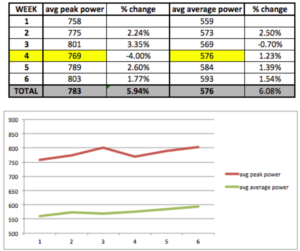 OK… So now you know WHAT a Wingate workout is, and you understand HOW to quantify/score the workout… now we get into the WHY we do these…

?If you have done this type of workout, you probably know that after about 15 seconds, the legs REALLY begin to burn!  Here’s why:

At the onset of exercise (no matter how hard or easy), our body derives energy (ATP) through a process.  I will explain this process:
The first few seconds of exercise, our body uses stored/circulating ATP.  Unfortunately, this is used SO FAST, that this only provides enough energy for about 2 seconds.  The ADP needs to be regenerated to ATP, so our body calls upon the ATP-PC System.  In simple terms, ADP grabs the phosphate off of Creatine Phosphate and becomes ATP.  So, if you ever wondered why Creatine Phosphate was a popular supplement… this is why!!

But alas, we only have enough stored Creatine Phosphate to allow this cycle to happen for about 10 seconds before it is depleted. The graph below shows the first 14 seconds of maximal exercise.  Note the sudden decrease in ATP after about 10 seconds.  Shortly after ATP is depleted, we are exhausted.

But we all know that we can exercise beyond 14 seconds.  In fact, completing a Wingate requires us being able to work 30 seconds at max effort.  Where do we get the energy to do this????

This is where glucose comes in. The Anaerobic Glycolytic System (Glycolysis) gets ramped up around 10 seconds to take over the ATP supply. Glycolysis is basically breaking down glucose for energy without using oxygen. Often times, even at the onset of an easy run or bike, there is a minute or two where your arms and legs burn a little bit. That is an artifact of this Anaerobic Glycolysis system providing energy.

Like sustained-anaerobic work (like a 5k), the byproduct of anaerobic glycolysis is lactate acid, which is quickly broken down into lactate and a hydrogen ion.  Lactate is a great source of fuel/energy, but the hydrogen ion can jack up our muscle machinery and cause that ‘burn’ we all experience.

This Anaerobic Glycolysis system is in charge until our aerobic system gets rolling (usually about 1 to 2 minutes into a workout).  If you continue to work at an aerobic intensity, this aerobic system is the primary energy powerhouse.
Anyway, this is what it looks like in picture form: 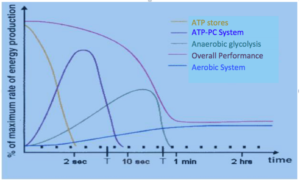 SIDE NOTE:  you remember our February challenge, where all of the efforts were 5 seconds?  Do you remember your legs burning?  Probably not.  That’s because we were working the ATP-PC system.  No glycolysis. Hence no lactic acid production.  Our February efforts were all under 10 second.  The <10-second efforts are called alactate (meaning without lactate).
Back to Wingates…

Now… Wingate efforts are only 30 seconds.  So which of these systems are activated?
1. ATP stores
2. ATP-PC System
3. Aerobic Glycolysis

Also note the ‘Overall Performance’ curve on the above graph.  What happens around 15 seconds?  How do you feel around 15-20 seconds into a Wingate effort?

Look back at the first graph (the 30s power profile of one Wingate effort).  Notice that around 15 seconds, the power really begins to plummet.

Is it beginning to make sense?

So… if we begin to decorate around 15 seconds, why do we do 30-second efforts?

Because we fully tap out the anaerobic system.  When we rest between repeated efforts, we replenish some ATP, but the cumulative effect of 6 to 8 efforts pretty much drains our legs.  And this is the exact effect we are looking for!

Why do we need fully maximize the anaerobic system?  Aren’t we endurance athletes?  The answer will hopefully thrill you:

One of the goals with endurance training is to increase VO2 max and our aerobic capacity.  One of the ways to do this is to increase the machinery that produces ATP aerobically (i.e. aerobic metabolism).  The cells that produce ATP aerobically are called mitochondria.  Research shows that repeated 30-second efforts has a similar effect on increasing mitochondrial SIZE and NUMBER as a 2-hour aerobic ride.  You read that right… At a molecular level, a Wingate protocol (6 to 8 30-second efforts with 4 minutes rest) produces the same results as a 2+hour aerobic bike ride.  Therefore Wingates are a highly effective way to build your aerobic system!

But you have to do Wingates correctly to realize this benefit.  30 seconds ALL OUT.  After a few reps, you are basically at exhaustion for the last 10-15 seconds.  Here is a video of me performing one Wingate effort.

The pain is tremendous, but so are the rewards!

Click HERE to watch a video of me explaining and performing a WINGATE effort: