Why the ‘little things’ matter

The last 3 weeks I have been drilling the philosophy of focus, single-mindedness, identifying the BIG DEAL, and making decisions on whether daily actions will HELP or HURT.

I want to zoom out a bit this week and provide you with some big-picture concepts that may help with this philosophy.

A long time ago (as in 30 or 35 years ago), I was exposed to a couple of cartoons that greatly shaped the way I viewed the world, my place in the world, and the importance of ‘right action.’

The first cartoon was from an artist who contributed to our monthly Mennonite magazine. He often wrote thought-provoking, in-your-face messages that offended, humored, and enlightened.  This one stuck with me:

The second cartoon (or rather story) seemed cheesy at first, but when given more thought, the implications of the story are profound. 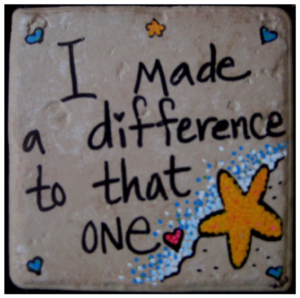 Once upon a time, there was an old man who used to go to the ocean to do his writing. He had a habit of walking on the beach every morning before he began his work. Early one morning, he was walking along the short after a big storm had passed and found the vast beach littered with starfish as far as the eye could see, stretching in both directions.

Off in the distance, the old man noticed a small boy approaching. As the boy walked, he paused every so often and as he grew coser, the man could see that he was occasionally bending down to pick up an object and throw it into the sea. The boy came closer still and the man called out, “Good morning! May I ask what it is that you are doing?”

The young boy paused, looked up, and replied, “throwing starfish into the ocean. The tide has washed them up onto the beach and they can’t return to the sea by themselves. When the sun gets high, they will die, unless I throw them back into the water.”

The old man replied, “But there must be tens of thousands of starfish on this beach. I’m afraid you won’t really be able to make much of a difference.”

The boy bent down, picked up yet another starfish and threw it as far as he could into the ocean. Then he turned, smiled, and said, “It made a difference to that one.”

Taken together, the clear message is that our actions have consequences. We may not see it when we look at the details, but when we zoom out, we realize that we can empower change.

To apply this to training (which seems shallow relative to World peace and saving lives), it should be obvious that the small things we do have a big impact.

So, if the small decision are made through the filter of “is this HELPING or HURING my chances of achieving my BIG DEAL?” then you are well on your way to excellence.